Negotiating for Software: A Way to Get More!

Ahhhh! The weekend is here and you are probably feeling pretty good right now. You’re on the way home and you just finished that software deal you have been working on for the past few months.

You may be the contracting officer who negotiated the best deal that you could for your agency, or you may be the IT sales representative that’s inching closer to your number for the quarter. Either way, it feels good to finally close that purchase order out!

Quick question for you: Was there money left on the table?

That’s a tough question to answer, isn’t it?

In the federal software world, deals are typically measured on the amount of discount given on a listed GSA price (or some other posted vehicle price).

You may say to yourself, “Hey, I got (or gave) a 30% discount from GSA…I did great.” It feels good to see a double-digit discount, but could you have done better?

In some industries, it is a bit easier to determine if both sides struck a good deal. Consider, for example, the act of buying a home.

There are “comparable sales” in the neighborhood that drive price and both sides have a framework from which to work. One can often find a comparison that justifies the end goal. However, in the federal software world, it’s much tougher because there are a few main factors that can drive price.

First, at the end of the quarter, discounts are more likely.

Companies are willing to discount to “get the deal in” before the quarter ends. Volume buys can also drive a better price. The more you buy the better the price. We view these as your typical, “one-year deal levers.”

Therefore, many folks think they need to buy a lot, near the end of the quarter, to do the best they possibly can. Not much else can move the needle and you’re doomed if you have a small deal in February.

But wait a minute, it’s well known that Software Original Equipment Manufacturers (OEM’s) have broad ability to discount software. Unlike hardware pricing, which is driven by fixed costs to build the product, software, once created, has minimal cost of sales and can be discounted very aggressively.

So, in the end, how do we know if we really maximized the outcome of the deal for our team? Can something else help us to do better?

In his famous negotiation book, “Getting More”, author and Wharton Professor, Stuart Diamond describes the concept of two parties working together to develop solutions that enable both sides to achieve more in a negotiation – rather than one party dominating the other.

Domination isn’t good for anyone.

It erodes trust and dramatically increases the likelihood that this will be the last deal between the parties. Instead, Diamond focuses on parties trading items of unequal value so that in the end, the deal is better for both parties than originally planned for.

Real quick – what does it mean to trade unequally valued items? Think about it like this:

Late check out at a hotel. It’s Sunday morning and it was a long night. Checking out at 1pm is a heck of a lot better than checking out at 10am. Guess what? It costs the hotel practically nothing to put your room at the bottom of the ‘ol clean-up list. But, is it valuable to you? An extra swim at the pool, a long time to enjoy breakfast, and extra time to pack up. Pretty valuable, right?

Do you see how both parties benefited in this deal?

OK, back to software.

Outside of the normal, “one-year deal levers,” there is a tool that can really help us to do better. This tool trades items of unequal value that enables both parties to Get More in a federal software deal. It’s called Multi-Year Financing.

Multi-year financing is taking a one-year deal, for example, and turning it into a three-year deal. The government pays for the first year, but the OEM is paid NOW for all three years. The government gets what it needs today, with what money it has, and the OEM gets a much larger deal.

This is enabled by trading unequally valued items:

1. Instead of a one-year contract, the government awards a base plus options contract (multi-year) for software

2. The government states in the contract that the technology they are buying is critical to its mission

It’s obvious that some technology is more critical than others. Search engines and anti-virus software are easily replaced. You can change your anti-virus software online in about 30 minutes. On the flip side, data center software that processes transactions for thousands of taxpayers for example, is pretty important. The next element of unequal value to trade is simply stating that the technology in the contract is important. It costs the government nothing to do this, but providing this confirmation enables the contractor to make an assessment of the likelihood of option renewals and technology replacement.

Options are never guaranteed but understanding the prospect of renewals enables a multi-year financing deal to come together. If there is little confidence that the contract will be renewed, it’s best to pursue a one-year deal. But, if the technology is critical and the probability of renewing is high, a multi-year deal can be struck and can be better for everyone. 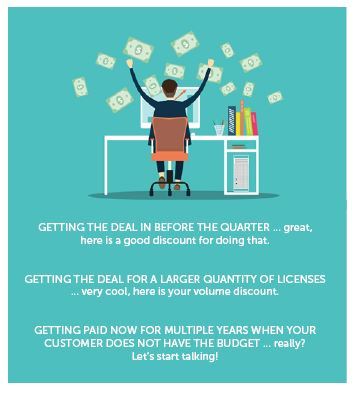 When items of unequal value are traded, the government gets a better discount than a one-year deal. Why is that?

When OEM’s get paid NOW for a larger deal, they are (most likely) more willing to provide even better discounting because a different dynamic is introduced. Here is a quick example:

We were working on a deal a few years back. The government had $8 million. They really needed an enterprise license. Well, it was about $25 million worth of software. But, if they were paid NOW, how much could the OEM discount?

The OEM received $12.5 million on day one and the government paid for it over 3 years... all because of financing. The savings for the customer were huge and the deal size for the OEM was made much larger.

Multi-year financing is a great tool that introduces a different “lever” for parties to use when putting a deal together.

By trading items of unequal value and using a multi-year approach, government customers and OEMs can do better than they normally would with a one-year deal. When this happens, money isn’t left on the table, but is actually maximized for both parties. That means that you can spend your weekend in peace because you know that you got the best deal possible for everyone involved.

3rd Year in a Row: Four Inc. Named One of the 2021 Best Places to Work in Virginia

We Are Family: Chad Morgan